MoJo, Matt, Steve, Kat, Lee and Maria at one of our shared meals on the front porch.

Over the years we have had varying degrees of success with sharing food. We have tried out a number of approaches from everyone buying their own food supplies to sharing most ingredients. We have tried both an incentive system and one based on taking turns cooking.

Nov 2012 Update: Our latest attempt at an organized shared meal system started in May 2012 and so far so good, We typically have three or four delicious community dinners per week, plus the sharing of smaller meals, snacks and treats. Usually there are leftovers. We have made some significant changes to the how we share. We now buy all our food ingredients out of a shared housefund of $230 per person per month. This fund also has been paying $35 per dinner to any of us willing to cook.

Starting this month, we are trying a slightly different way of rewarding people. Whatever is left in the house fund at the end of a month after paying for food and cleaning supplies will be distributed evenly as an hourly rate among those who recorded time spent cooking and cleaning.

END_OF_DOCUMENT_TOKEN_TO_BE_REPLACED 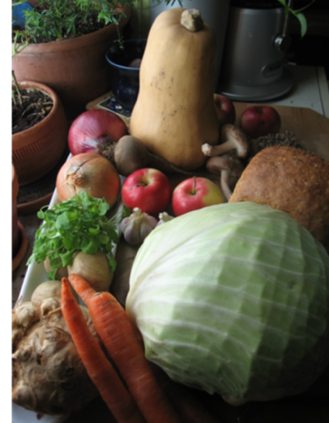 At the house we aim to eat a fair bit of local foods which isn’t always so easy in the winter. We shop at the nearby Dufferin Grove Farmers Market where the selection has whittled down to potatoes, beets, cabbage, onions, squash, leeks, turnips, shiitake mushrooms, celery root, carrots, apples, fresh baked bread from the brick ovens, and baby greens from a greenhouse. That last item turns out to be not necessarily the best choice for the environment. Greenhouses often require large amounts of energy for heating and lighting. See previous article.

Many of these items were harvested a couple of months ago, but hearty roots, cabbage, squash and apples are technically still in season since they are easily stored.

According to a UN study reported in the Guardian, climate change emissions from shipping amount to 1.12 billion tonnes of CO2 a year, or nearly 4.5% of all global emissions of the main greenhouse gas. This is almost three times higher than previously believed. Ships exploit a ready supply of the world’s cheapest, most polluting “bunker” fuel. Marine heavy fuel oil, which is burned by all large ships, is the residue of the world’s oil refineries. It is as thick as tar. Burning the stuff also releases alarming levels of cancer-causing air pollution (see pdf graphic). The industry has grown rapidly – to the point where it now carries more than 90% of the world’s trade by volume

, and has tripled its tonnage carried since 1970. Cargoes also have to travel further due to a shift of production away from the US and Europe to China and south Asia.

“Food imports from China have exploded over the past decade, rising nearly 300% to more than $705 million last year,” says a May article in the Toronto Star that cites Statistics Canada. China is now Canada’s fifth largest supplier of fresh fruits and vegetables. Another big category is fish and seafood. At the Toronto Food Terminal, Chinese peas sell for ten dollars a case. A vegetable wholesaler told the Star, “In Canada you couldn’t do it for that price if everybody worked for free!” There is the risk of Canadian farmers being priced out of existence.

On a positive note, sea-freight emissions are much less than if you were to ship the same weight by airplane. The aviation industry is responsible for about 650 million tonnes of CO2 emissions a year. And due to their huge cargoes, ships are usually more efficient than trucks, and you don’t have to build highways.

The New Yorker has an eight page article titled Big Foot that takes a close look at carbon footprints. The local 100-mile diet – eating only foods produced within a 100 mile radius – has been promoted as the ultimate in ecological eating. But it turn out that when evaluating food, you have to consider the entire life cycle of the product. For example:

I buy imported avocados, limes, rice and lentils. But learning about the environmental costs of shipping reminds me to keep the focus on locally-grown and seasonal foods. Seasonal means eating stuff when it is in season (such as strawberries in June), or hearty foods such as roots, cabbage, squash and apples that have had their season extended by proper storing. Dry foods like grains, legumes, nuts and seeds are effectively always in season because they easily store for months and months. Preserving local food by freezing, drying or canning is another solution.