In September, I joined a really cool Toronto group called Not Far From the Tree. They harvest fresh fruit from people’s backyards. The group is made up of volunteer gleaners. Everyone benefits: the tree owners who get a share of the harvest and their yard cleared of falling fruit, the volunteers who get exercise, social interaction and a share of the bounty, and homeless shelters who are the main recipients of this free harvest. The program is also very good for the environment as it supports locally-grown produce – you can’t get more local than a backyard tree. Eating this way avoids agricultural pesticides and herbicides as well as the fuel for long distance shipping.

John (who lives at the house) and I went on a couple of pear picks this Fall. We were assigned to a huge tree with an enormous bounty of fruit. At the end, our share amounted to over 50 pears each. I climbed high into the tree and took the following photos. 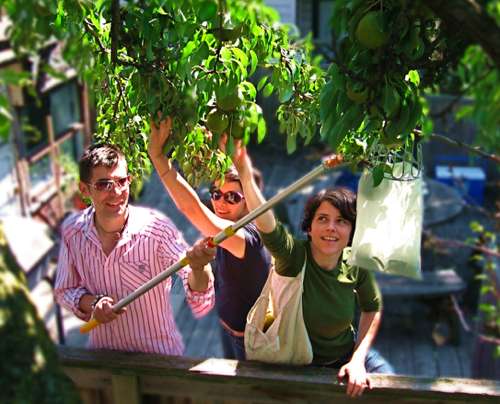 John picking pears with Shannon and Jen, two other volunteers

Helen bravely climbs up to get another heavy bag of pears that I am about to hand her.

A couple weeks later, we picked another pear tree. This time I recorded the count: 12 large bags (and one bucket for the owners). Together they weighed about 250 pounds (over 110 kilograms). I estimate we got 1150 pears from that single tree. There were still a lot more that we couldn’t reach and others that weren’t ripe enough yet. And before we arrived much fruit had already fallen. The owner reported that a small branch weighted with pears had come crashing down a few days prior.

Our team of gleaners including the tree owners on the left. I am in the center. We picked this pear bounty in just a few hours with the help of the blue tarp in the photo. With a person holding each corner, it was held suspended below the tree while I was high up in the canopy shaking branches.

Fruit trees produce a lot food using very little land. Years ago, I researched how much land it takes to feed people. I wanted to know how the land footprint compared between vegetarians and meat-eaters. If you divide all the agricultural land in North America by the population it comes out to about 3.5 acres per person. But it turns out that vegetarians can subsist on a fraction of this amount.

Picking pears this Fall really proved to me how true and important this is. Just a few trees can produce more food than you could possibly eat in a year. Other plant foods such as potatoes and grains are also very productive. Eating low on the food chain frees up farmland that can be returned to wilderness. It also means less soil erosion, less dams, less pesticides and less energy use.

In addition to pears, Not Far From the Tree has picked apricots, apples, elderberries and grapes. So far this year they have picked over 3,003 pounds of fruit that would have otherwise fallen to the ground.

At the house we aim to eat a fair bit of local foods which isn’t always so easy in the winter. We shop at the nearby Dufferin Grove Farmers Market where the selection has whittled down to potatoes, beets, cabbage, onions, squash, leeks, turnips, shiitake mushrooms, celery root, carrots, apples, fresh baked bread from the brick ovens, and baby greens from a greenhouse. That last item turns out to be not necessarily the best choice for the environment. Greenhouses often require large amounts of energy for heating and lighting. See previous article.

Many of these items were harvested a couple of months ago, but hearty roots, cabbage, squash and apples are technically still in season since they are easily stored.

According to a UN study reported in the Guardian, climate change emissions from shipping amount to 1.12 billion tonnes of CO2 a year, or nearly 4.5% of all global emissions of the main greenhouse gas. This is almost three times higher than previously believed. Ships exploit a ready supply of the world’s cheapest, most polluting “bunker” fuel. Marine heavy fuel oil, which is burned by all large ships, is the residue of the world’s oil refineries. It is as thick as tar. Burning the stuff also releases alarming levels of cancer-causing air pollution (see pdf graphic). The industry has grown rapidly – to the point where it now carries more than 90% of the world’s trade by volume

, and has tripled its tonnage carried since 1970. Cargoes also have to travel further due to a shift of production away from the US and Europe to China and south Asia.

“Food imports from China have exploded over the past decade, rising nearly 300% to more than $705 million last year,” says a May article in the Toronto Star that cites Statistics Canada. China is now Canada’s fifth largest supplier of fresh fruits and vegetables. Another big category is fish and seafood. At the Toronto Food Terminal, Chinese peas sell for ten dollars a case. A vegetable wholesaler told the Star, “In Canada you couldn’t do it for that price if everybody worked for free!” There is the risk of Canadian farmers being priced out of existence.

On a positive note, sea-freight emissions are much less than if you were to ship the same weight by airplane. The aviation industry is responsible for about 650 million tonnes of CO2 emissions a year. And due to their huge cargoes, ships are usually more efficient than trucks, and you don’t have to build highways.

The New Yorker has an eight page article titled Big Foot that takes a close look at carbon footprints. The local 100-mile diet – eating only foods produced within a 100 mile radius – has been promoted as the ultimate in ecological eating. But it turn out that when evaluating food, you have to consider the entire life cycle of the product. For example:

I buy imported avocados, limes, rice and lentils. But learning about the environmental costs of shipping reminds me to keep the focus on locally-grown and seasonal foods. Seasonal means eating stuff when it is in season (such as strawberries in June), or hearty foods such as roots, cabbage, squash and apples that have had their season extended by proper storing. Dry foods like grains, legumes, nuts and seeds are effectively always in season because they easily store for months and months. Preserving local food by freezing, drying or canning is another solution.

END_OF_DOCUMENT_TOKEN_TO_BE_REPLACED 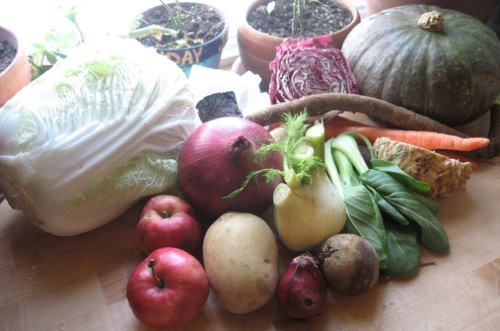 Last week, I went to Dufferin Grove organic Farmer’s Market where there is still a good variety of local produce. I got a large Chinese cabbage, apples, potatoes, red onion, beets, fresh fennel, baby bok choy and a buttercup squash. Behind the red onion (see photo) is a piece of Maria’s delicious organic Spiced Fruitcake. I also bought greenhouse-grown coriander, homemade granola and buckwheat flour from one of the farmers. The radicchio and celery root are from the previous week and the carrots and burdock root are from Karma Food Coop (also local and organic).

I was surprised to see local greens. The farmer told me that greens can be covered with special sheets of plastic or burlap to protect them from the cold and extend the harvest season. The sheets are reusable.

Tonight, using the above greens, squash and red onion, I made a quick but tasty stew. I just fried the onion and squash for a few minutes in the bottom of a large pot, then added some spices, salt, a dried hot pepper, some black beans and water. Right near the end, I added chopped cabbage and bok choy.

Our banner has been updated with a picture of some the food in the kitchen of our co-op house. From left to right: fresh soymilk from our automatic soymilk maker, red onion, apple and beet, ginger, hot pepper seeds, giant while corn (also known as maiz mote pelado or hominy) that Natalie uses to make a delicious vegan version of Mexican Posole (thick soup), black beans, local baby bok choy, buttercup squash and a potato. All the veggies came from the nearby Dufferin Grove Farmer’s Market.